from the Second World War,  and a further 43 graves of personnel who died on active service.

During the Second World War there was a Royal Air Force Station at Scampton, and in the early months of the war a plot of land lying to the right of the church entrance was set aside for the burial of servicemen. In 1941 it became necessary to reserve further ground for this purpose and a plot in an extension of the churchyard north of the church was used. The war graves in this burial ground are therefore in two sections and these are linked by a footpath. The war graves contain those who flew with the Royal Air Force, Royal Canadian Air Force, Royal Australian Air Force and Royal New Zealand Air Force, as well as German Luftwaffe.

A research project by members of Scampton church intends to map and document as much personal information relating to each of the service personnel buried here. Every year Scampton Church receives hundreds of visitors who come to wander up and down the rows of headstones, stopping to read the names and are saddened by the loss of so many young men.

Members of Scampton Church Family have risen to the challenge to find out more about each and every one of them. We are searching for their stories, about their lives and photographs that will put a face to the name which is engraved on their headstone. We realise that this may take a long time, but we hope to encourage you to take part. These men deserve to be remembered. Run the cursor over the names below to follow the links to the research so far.

The National Churches Trust has included Scampton Church in its 'Lincolnshire Remembers' project which is associated with the International Bomber Command Centre, Lincoln. Our church page on the website includes a feedback section. We encourage you to leave your comments. 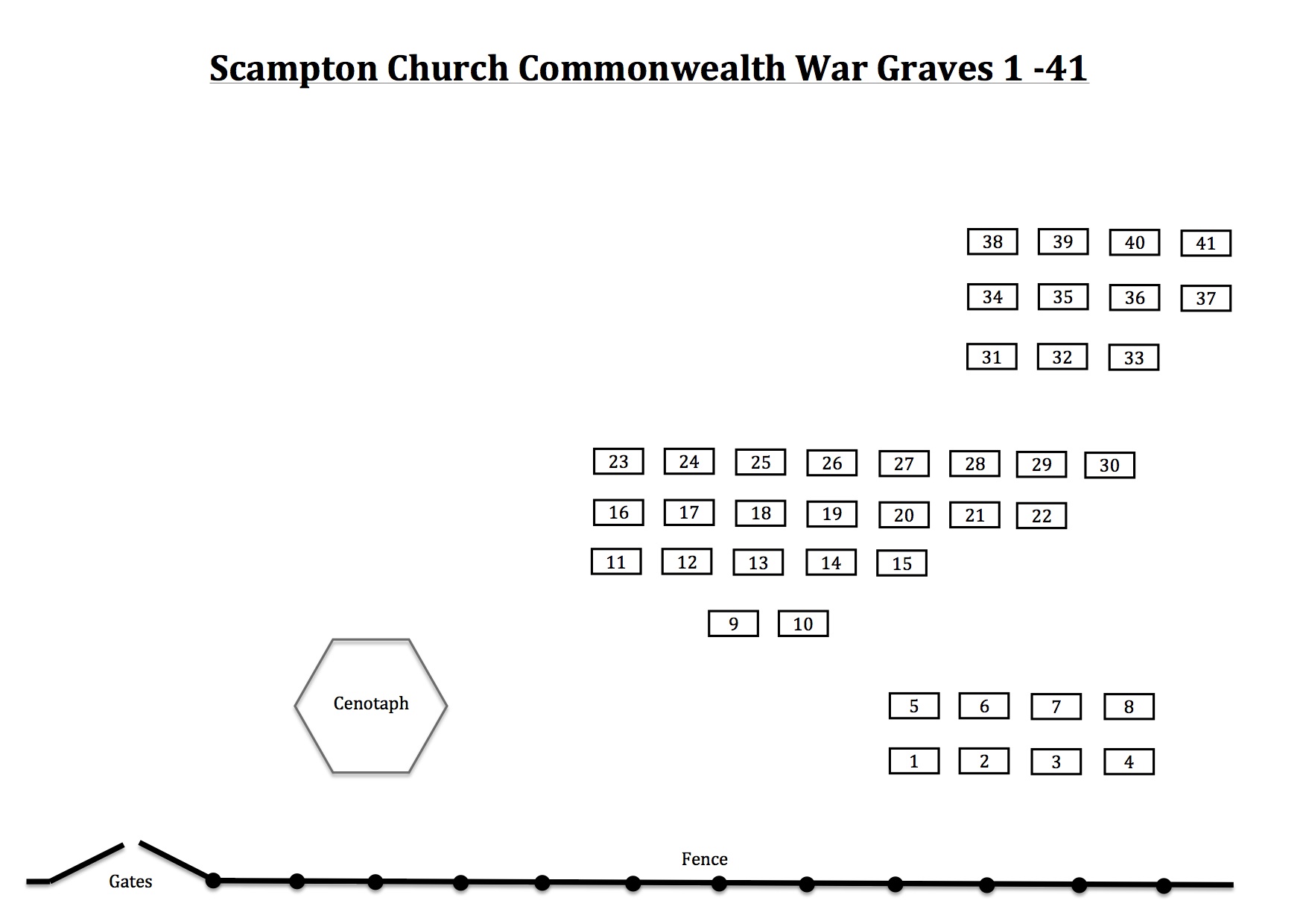 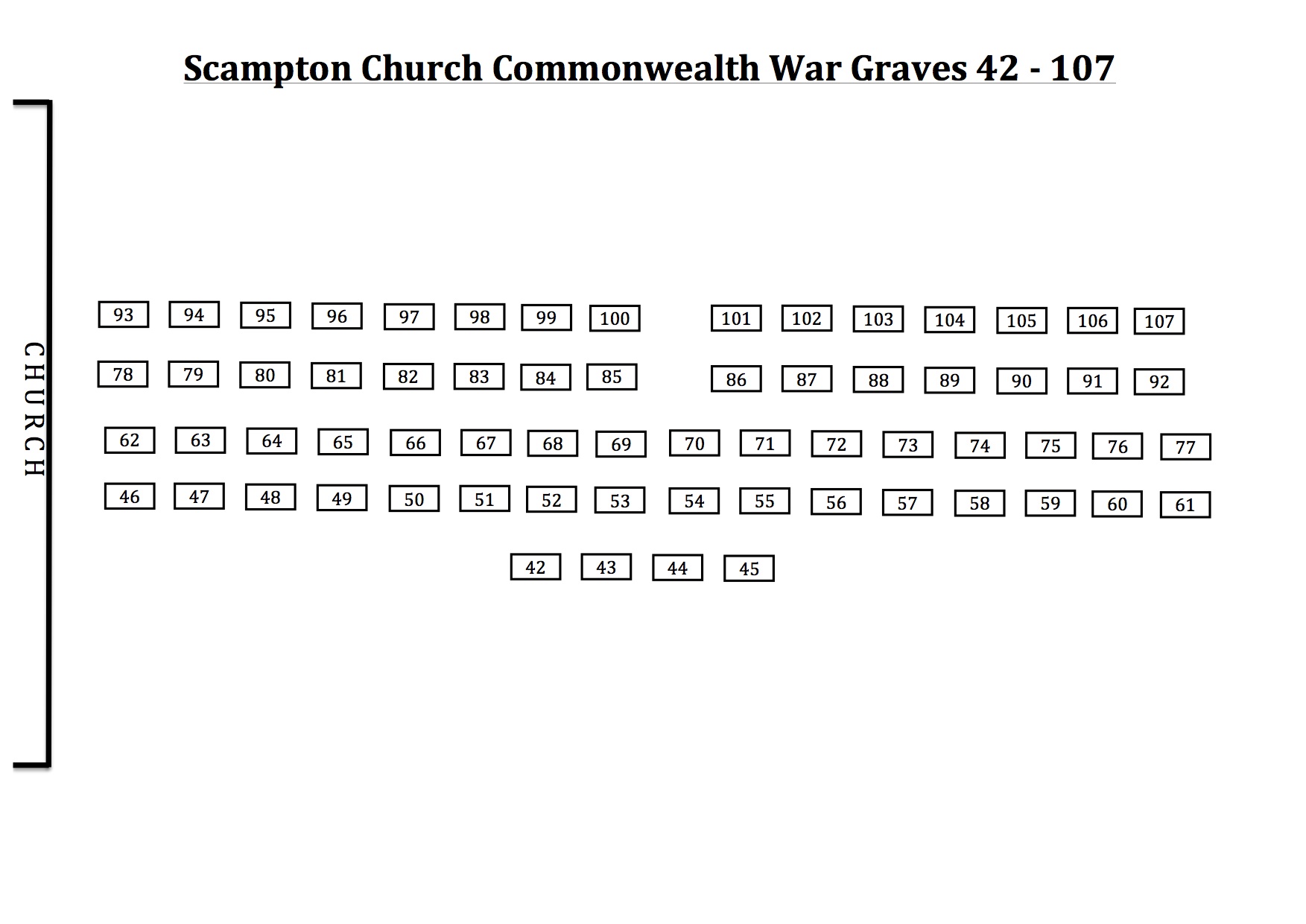 Underneath the large red maple tree at the front of the churchyard there are eight graves from two Junkers 88 crews.  In Lincolnshire this is not unusual as having 46 airfields and being known as bomber county, it was the target of numerous German raids during the war.

What makes these two crews interesting is the story that goes with them.

The first is Junkers 88 No. 5168 Ft + BS of 9/KG76 Bomber Training Wing 4 from Griefswald in Germany and loaded with 50Kg bombs (23 being found in the wreckage). This plane was on a mission to bomb RAF Hemswell, about 4 miles North of RAF Scampton. Being picked up on radar it was tracked and shot down by RAF Scampton ground defences at 0135 on 12th May 1941. The tail unit was seen to break off and the plane burst into flames and dived into the ground.

The wreckage hit the land belonging to a farmer called Miller, he and his wife running to the site when they heard the explosion. The pilot Lieutenant Kurt Hanning died in the arms of Mrs. Mliier with all the others being killed in the explosion. Not an unusual episode in wartime Lincolnshire but what happened next is.

Five days after the crash Mr Miller was preparing to work in a field near the crash site when he spotted what he thought was a bundle of rags. On investigation it turned out to be a body and obviously from the condition it was connected with the crash. Five crew from an aeroplane that only needs four crew?. This was cause for investigation....was a spy due to be parachuted into England during the raid?

Even wartime England wasn't short of conspiracy theory's and the one that persists to this day is that the pilot had given his girlfriend a joy ride over England when the plane was shot down! The truth is a little more mundane but interesting. A ground crewman E.H Reidel was reported AWOL from the base the next day and it is almost certain that he took an illegal joy ride that night. That's why there are two names on one of the gravestones for this plane.

The second Junkers 88 met its end on 4th March 1945. This date is known as 'the night of the intruders'. A force of 200 Junkers 88's of the Luftwaffe Night Fighter Destroyer Group flew at wave top height making landfall between the Thames estuary and the North East of Yorkshire and undetected by radar. Their mission - to intercept bombers returning to base at the end of their flights and shoot them down.

This Junkers 88, piloted by Sgt. Heirech Conze, started the night 'well' by intercepting a Lancaster over Langworth (about five miles east of Lincoln) and shooting it down. He then proceeded to look for other targets, getting away from Langworth, as he knew RAF Mosquito night fighters could now be on their way. About two miles east of RAF Scampton he spotted a car's headlights, even though they were hooded, and dived to strafe it. Not realising that there were telegraph poles and wires at the side of the road, the plane hit them and then collided with the car, throwing it two fields away. The car driver and the crew of the plane were killed instantly.

What makes this story interesting is that the car driver, Observer Jack P. Kelway, was going on duty when he was killed, making him the only member of the Royal Observer Corps to be killed on a active service. Jack's grave is only a few miles away from the graves of the crew that killed him, at Newport Cemetery, Lincoln. 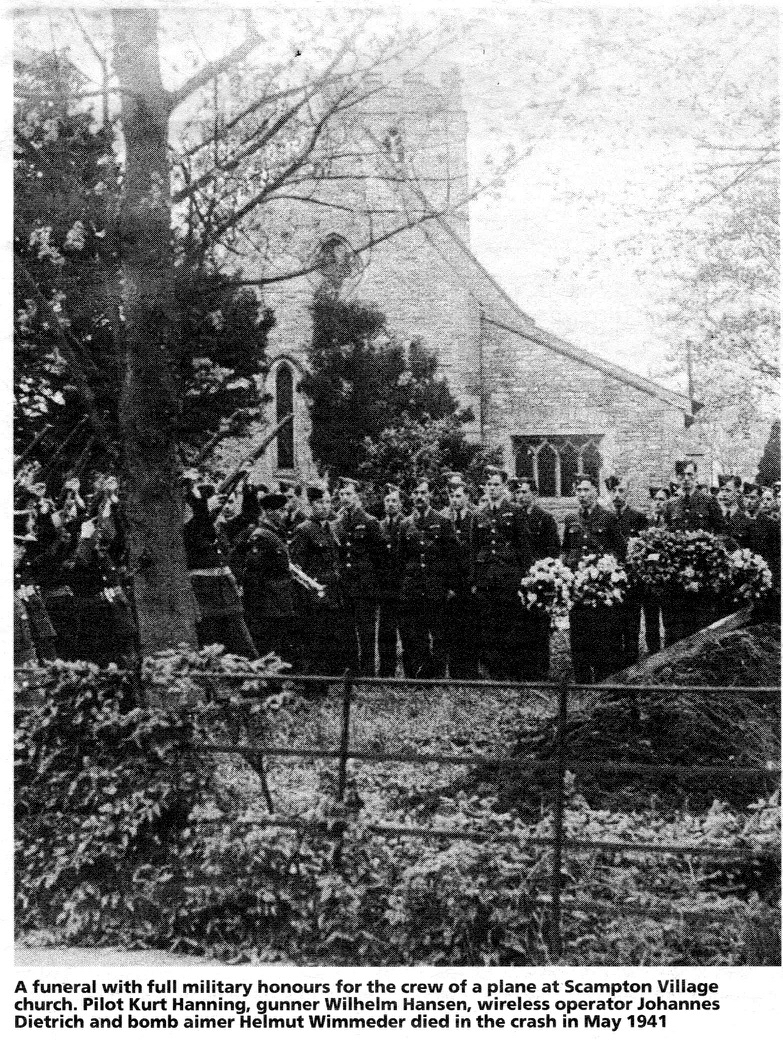 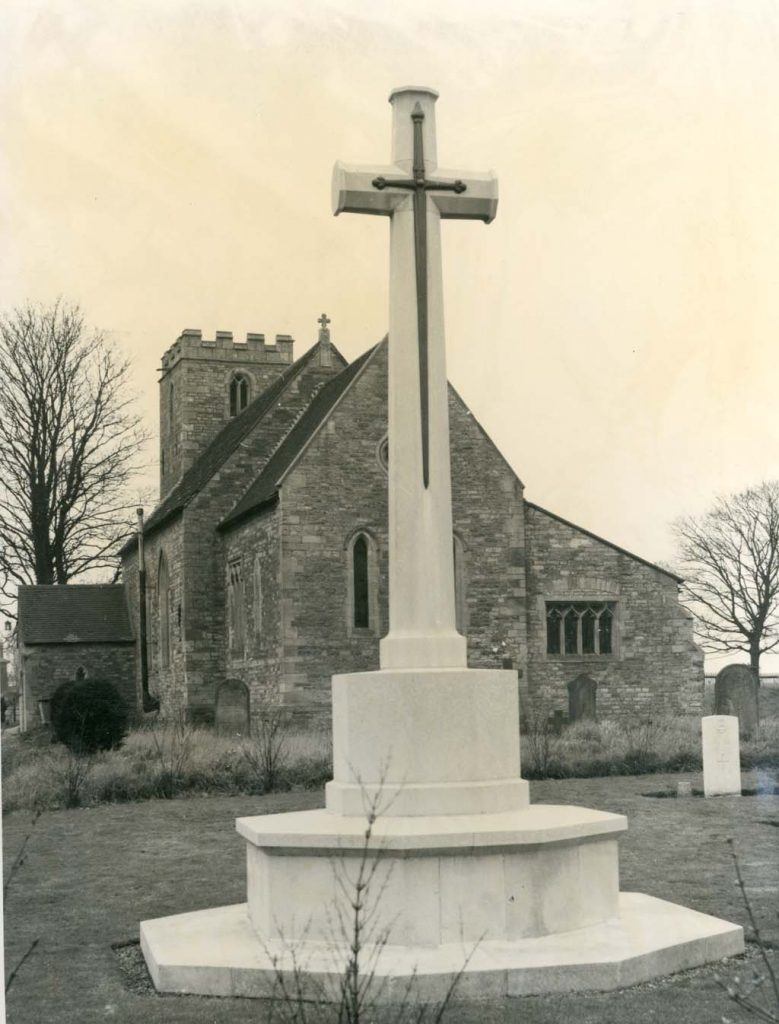 A book relating to the white military headstones in the churchyard is available from local bookshops and online retailers ('Slightly Below the Glide Path - RAF Scampton' by Brian Mennell and Gary Mennell. Fox 3 Publishing York. ISBN 978 0 9566319 0). 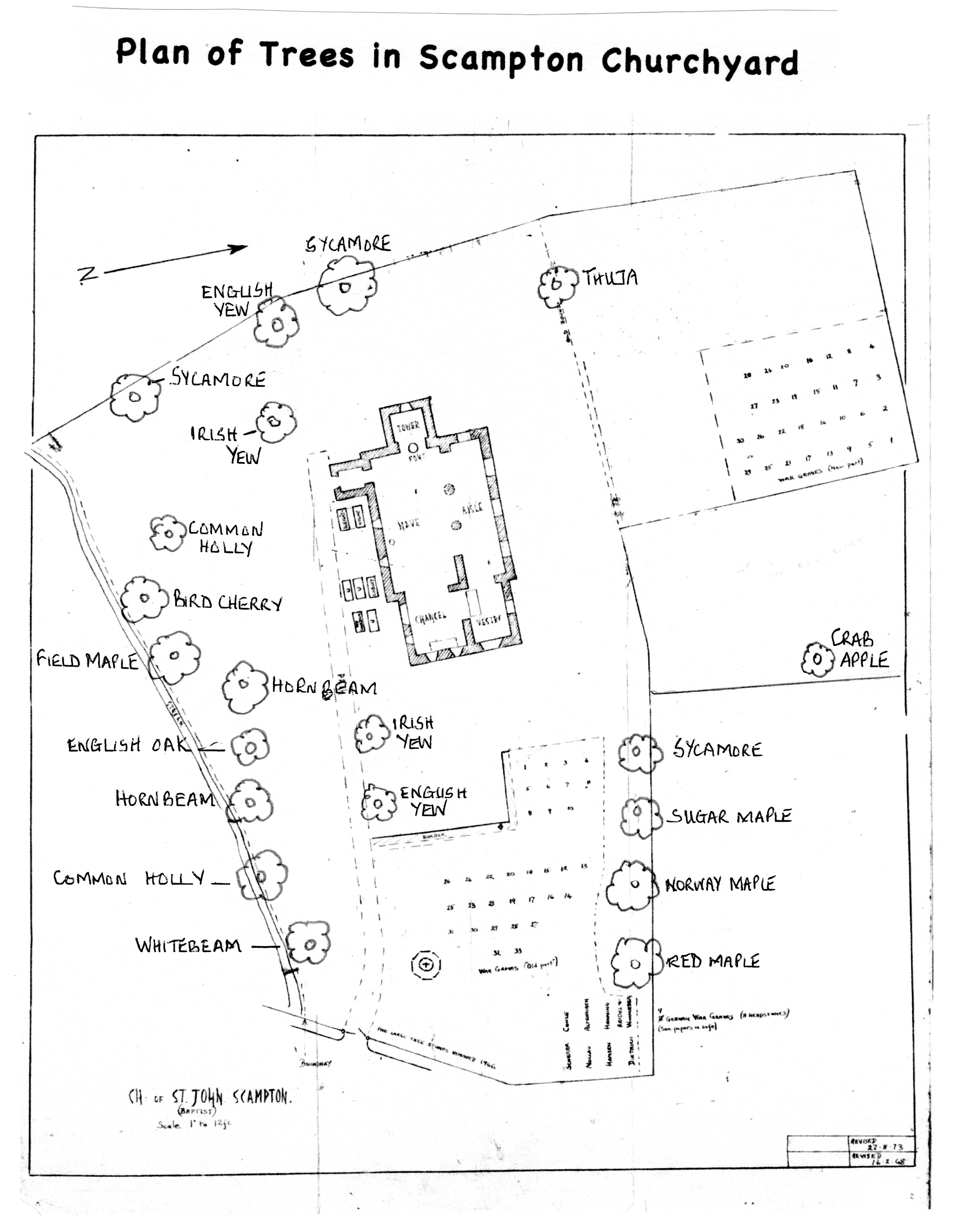