Scampton church is dedicated to St. John the Baptist. 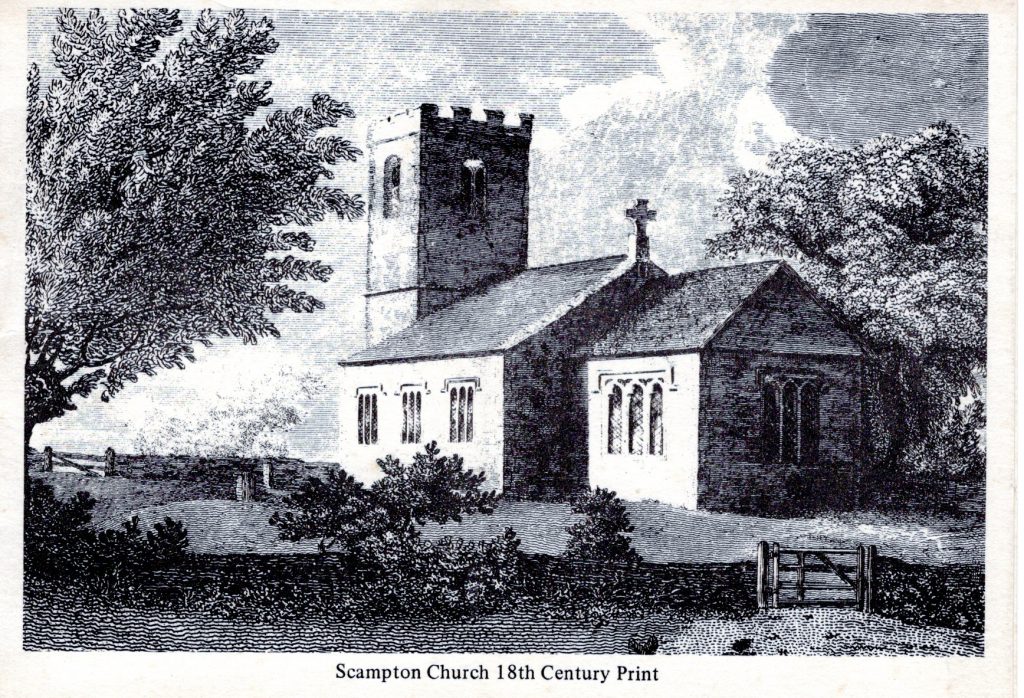 There was a church on this site before the Norman Conquest but no part of the present building seems earlier than the first part of the 14th century, to which period the nave pillars and arches may be attributed. The previous building was much larger than the present one. It became dilapidated in the 18th century and was almost entirely rebuilt in 1794 at a cost of £400. There was a further restoration in the 1870’s.

The three bells, at Scampton church are housed in the fourteenth century bell tower, but have not rung for many years. The details of the bells are as follows:

Bell one (Treble) - has a diameter of 24 ⅝ inches and weighs 152Kg. It was founded by John Sleyt of York in 1399. It carries the inscription (translated from Latin) 'I being rung am called Mary the Rose of the world'.

Bell two (Tenor) - has a diameter of 27 inches and weighs 186Kg. It was recast by John Taylor and Co. Loughborough in 1877 and carries the inscription: 'St. John the Baptist. May this bell remain sound all round'

Bell three (Bass) - has a diameter of 28 ¼ inches and weighs 254Kg. It was founded by Henry Oldfield Nottingham in 1582 and is inscribed 'Jesus be our speed'

The registers begin in 1538, the year in which registers were first ordered to be kept in England. Extant registers of this early date are unusual. The small monumental brasses on the north wall of the sanctuary relate to the Bolles family, who were lords of the manor in the 17th century. One of their number, Sir George Bolles, was Lord Mayor of London in 1617. The manor of Scampton was given by William the Conqueror to the celebrated Gilbert De Gaunt. It was afterwards given to Kirkstead Abbey. In 1590, it was the property of Sir John Hart who's daughter carried it in marriage to Sir George Bolles a church benefactor. The organ was made by Forster and Andrews in 1876.

In 2011 skeletons were found in a field near the church, some enclosed in rude stone coffins, so that it is probable that the Saxons had used part of a building there as a chapel and place of sepulture. It is recorded that there was anciently a chapel at Scampton near an adjacent spring called St Pancras's Well.

A feature of the churchyard is the double section of graves of members of the Royal Air Force. These men, representing nearly every one of the Dominions, met their deaths during the war, through wounds or in crashing aircraft returning from raids on enemy territory. Because the Royal Air Force station is in the parish the men were buried here. Gravestones have been provided, and graves are maintained, by the Commonwealth War Graves Commission.

There are eight German war graves, situated near the road. These men belonged to German aircraft which had attacked military objectives in the district and had been brought down nearby. Sometime later it was discovered that there was an extra man on board one of the aircraft and so a name was added to one of the original headstones.

Burials from Royal Air Force Scampton have continued since the war in a separate section of the churchyard and this is was by the Department of the Environment but responsibility has now moved to the Commonwealth War Graves Commission. The slight difference in the shape of the top of the headstones indicates the various sections.

The church houses an RAF Chapel which is furnished with the original squadron shields, and honour boards from the officers mess at RAF Scampton and the altar and small pews from RAF Swinderby when that closed down. The carpets in the chapel were donated from RAF Kirton in Lindsey when it closed down.

It is our vision to make St John the Baptist a community church and RAF heritage centre. We want it to be an amazing, comfortable and warm church that is here for future generations that will continue to be used by local community groups, schools and congregation.

Download an expanded history of Scampton Church by Historic England. 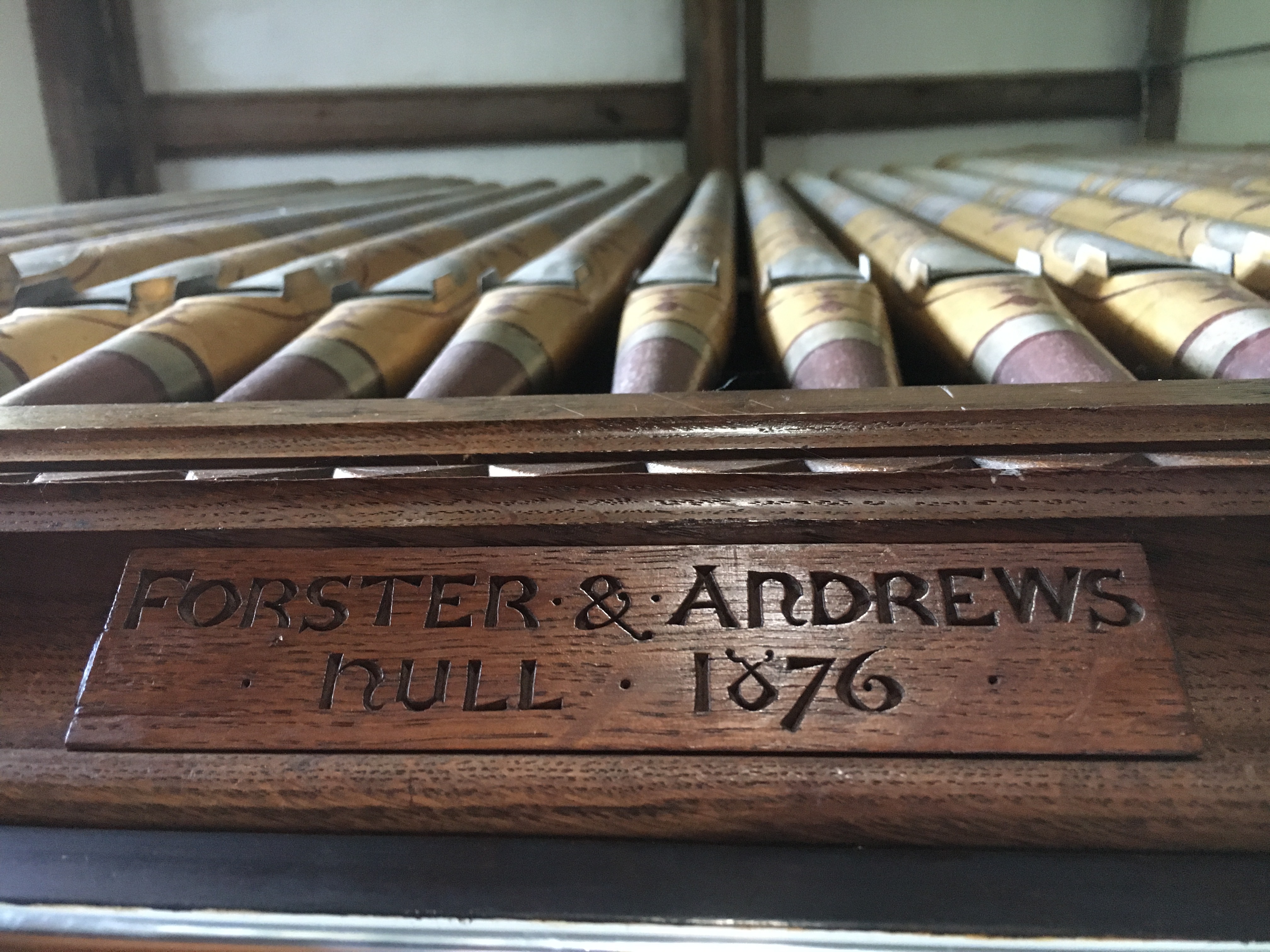 Church organ - made by Forster & Andrews Hull. It originated from the chapel at RAF Binbrook 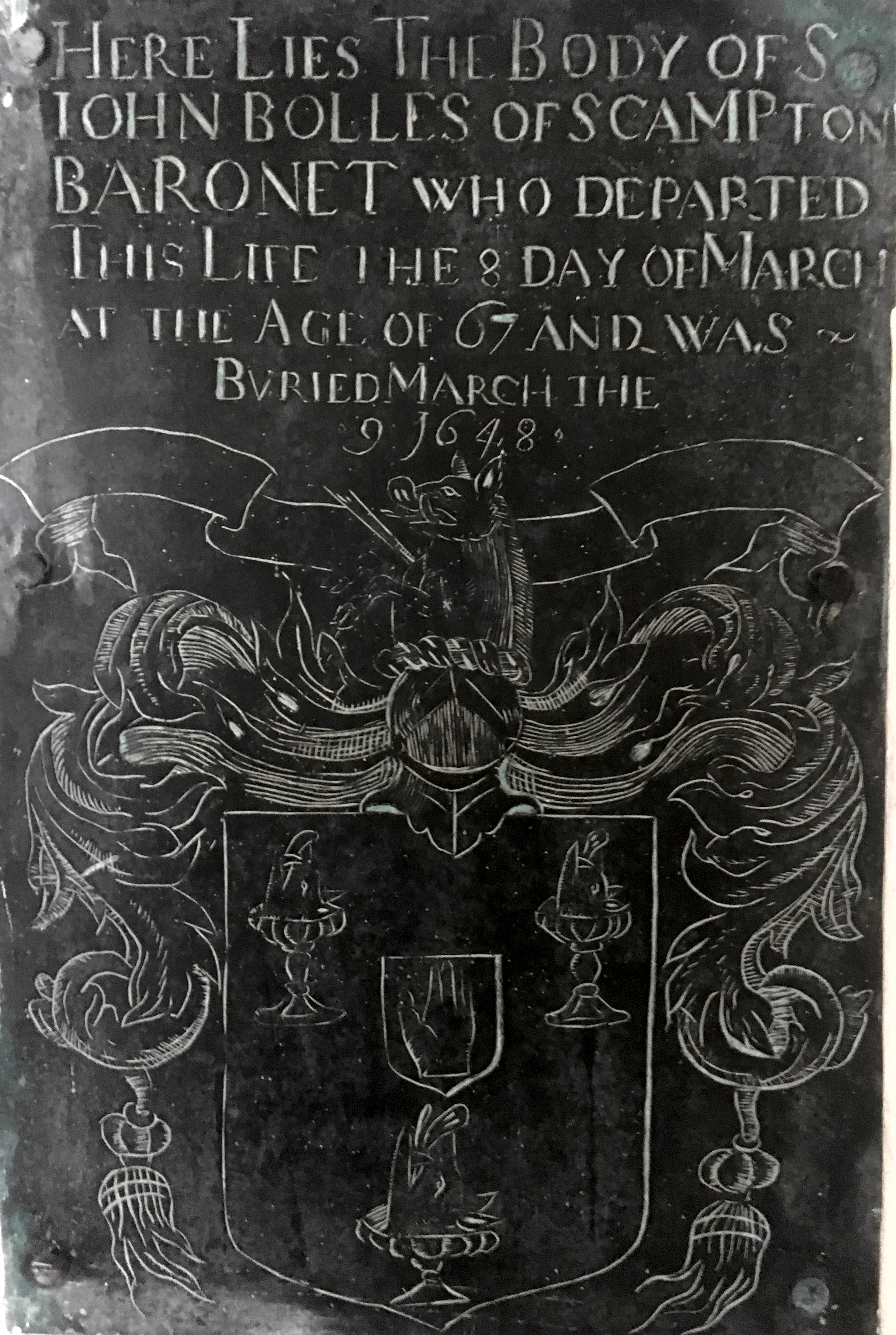 Commemorative plaque in the chancel to the

Take a video tour of the belfry. Plans are being made to restore it, enabling the bells to be rung again.